Gordon Brown bid a farewell to the Labour Party with his Manchester conference speech. It was a brief conference speech in Manchester, not least because his speech was timed just before the announcement of Ed Miliband as his leadership successor. 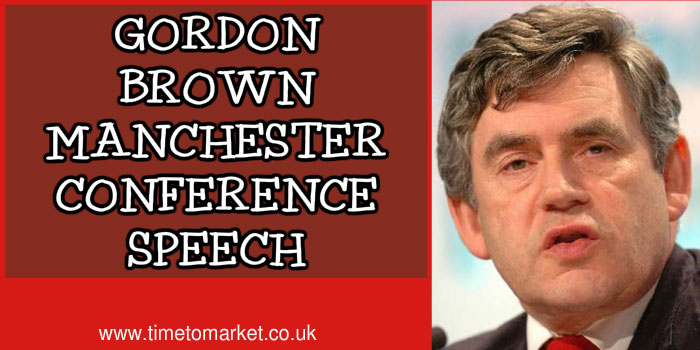 Manchester Conference Speech Marks The End Of An Era

He’s made a point of lying low for the last few months as the leadership contest ran on. A good move, really.

In his short speech today he was in ebullient form. He made a point of thanking those who had the position of leader before him…John Smith, Neil Kinnock and Tony Blair.

And it was mention of Tony Blair that prompted a rare show of humour from the MP for Kirkcaldy & Cowdenbeath. So, this was really quite shocking, rare material.

“Even though I’m a full time MP I got a letter from someone offering me a job and asked a reference. Tony said he was writing one, I just didn’t expect it to weigh in at 700 pages.”

There were other jokes from the former prime Minister. These included a thank you to the free press for its:

This was more than tolerable Manchester conference speech material from a man not known for public displays of humour in his public speaking. So, farewell Gordon. Ever onward.

Why not discover more about humour in the conference speech? Or, you can always learn more about farewell speeches, at conference or otherwise, with a coaching session from Time to Market. Perhaps, you can opt for a coaching session at the Manchester training centre. Or you can choose one of more than 40 training centres in the UK, and build your public speaking skills. Then, watch how your confidence grows, in turn. Please don’t hesitate to get in touch when you are ready to find out more.