Poor old Lord Prescott (John Prescott) has managed to hit the headlines with more public speaking adventures. A Queen Mary speech. It wouldn’t be charitable to say that he doesn’t bring much to the world of public speaking. So being charitable we will record the fact we cite his contribution to the position taker technique on most of our presentation skills courses. That’s a real public speaking technique and is no reference to his previous risqué exploits! 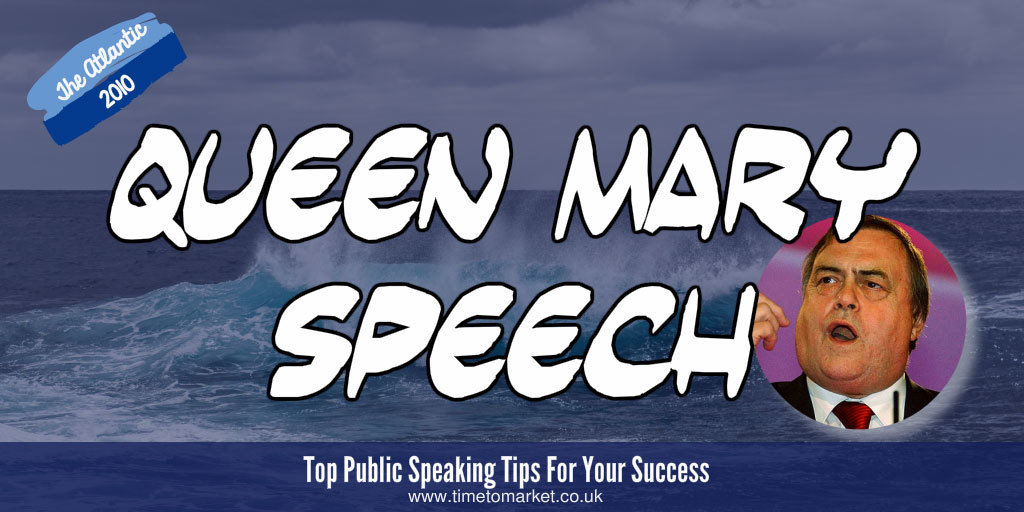 But his recent Queen Mary speech experience on board the Queen Mary 2 is one that he won’t want to re-live.

Lord Prescott, who was deputy Prime Minister to Tony Blair until 2007, had been booked by Cunard to deliver two speeches to passengers on board the Queen Mary 2 luxury liner. And the voyage? Leaving New York bound for the Mediterranean. Luxury.

His arrival on board was inauspicious. Not least, because the ship was delayed awaiting his arrival from a snow-bound London Heathrow. And his speech?

A Maritime Disaster Of A Queen Mary Speech

Well, it was little short of a maritime disaster. Passengers noted how he managed to lose his way and stumble with his words. Now that can happen to the best of us…David Cameron lost his place in an important speech only a few weeks ago.

But it was the tone set by his jokes about life below decks that proved a turning-point for his audience. So, he recalled his time spent as a P&O steward in his youth as he dredged up a sea chest full of maritime exploits. His mainly American audience clearly didn’t appreciate them. Since they were reported to be all at sea with his anecdotes.

And his response? Well, he’s confined to his cabin with a mild case of norovirus. That’s the official line. Some non-seasonal commentators have suggested that Lord and Lady Prescott are too embarrassed to venture out for his second Queen Mary speech. Now that is uncharitable.

Hey ho, work on the ocean wave has its ups and downs.

You can always navigate your way through our series of public speaking tips. And with more than 100 from which to pick, you’ll find something for every public speaking occasion. At sea or all at sea. Plus, when you want some more security for your speeches, then don’t forget that our specialist training might just be your answer. So, when the time is right, please don’t hesitate to get in touch.