The Minister is new and he’s definitely blue. Tory blue! But there was something definitely old and borrowed about the speech given by the new Minister for Housing at the Royal Institution for Chartered Surveyors (RICS) in London. Because this Grant Shapps RICS speech was recycled. 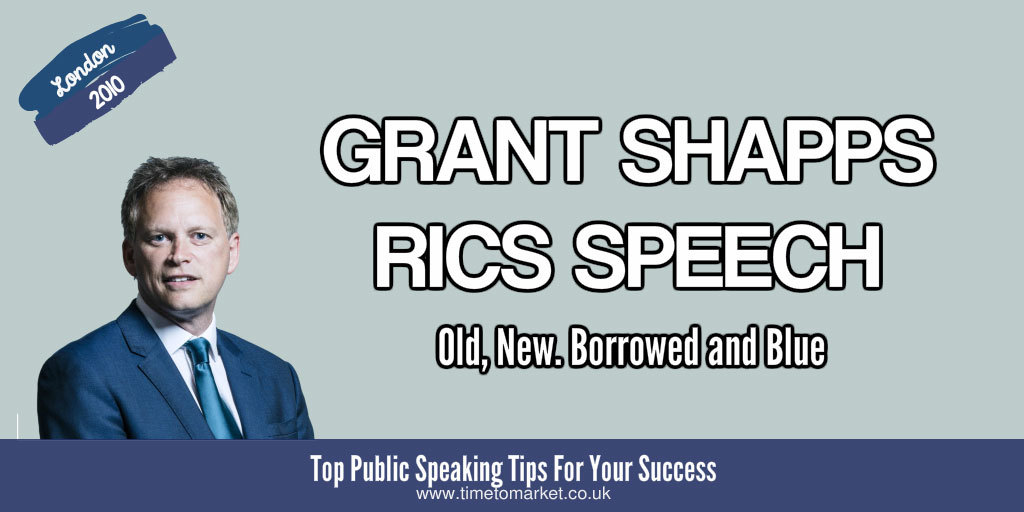 His speech was undeniably well-constructed and of a good length. The introduction used self-deprecating humour to good effect:

“As one of my staff cruelly pointed out — ‘Minister, you spent longer as a shadow than Cliff Richard!'”

A Running Theme To This Shapps RICS Speech

Then, his theme of “aspiration” was clear from the beginning. And, of course it was there throughout his speech and he hammered home in his conclusion. No problems there.

He also made good use of position takers, such as:

“Now, my predecessor famously said that falling levels of home ownership were ‘not such a bad thing’…I believe that home ownership is a very good thing.”

And, he also used some not this…but that phrases pretty well, with some repetition for added effect:

“So in place of those meaningless targets–we will introduce powerful incentives. In place of centralisation–I will devolve power. In place of expensive Quangos–we will trust people.”

This turn of phrase is very reminiscent of the David Cameron new society speech. Of course this shows just how the new government is joining up its communications across the various departments. But there’s an issue.

Many of the Whitehall speech writing staff are still conditioned to the old government. Thus, in the Minister’s conclusion we heard:

“The last thing we need is a return to the house price boom and bust of recent years.”

Equally borrowed was the theme, the age of aspiration. Gordon Brown’s first speech to a Labour Party Conference as Leader in 2007 used this extensively. And Gordon Brown used the same form of words in an interview as recently as January 2010.

I suspect that Whitehall staffers were involved with this speech. Certainly one sentence is a telling clue…

“Borrowers will need to demonstrate financial responsibility and show that they can sustain home ownership.”

There are new Tory blue ideas here. But there are telltale signs of old, borrowed phrases.

Note to self…must have a word with the Permanent Secretary. For a relative newcomer however, this Grant Shapps RICS speech was more than passable. But, please aim for some fresh material.

Of course you can discover plenty of new ideas and suggestions for your own speeches with our series of public speaking tips. And with more than 100 top tips for speakers and presenters, there’s something here for every speaking occasion. Plus, when you want to grow your skills that bit further, then why not consider some training. Because a public speaking skills course will boost both your confidence and skills levels. So, when the time is right, please don’t hesitate to get in touch.