There's something quite mawkish about a concession speech. But this Tony Abbott concession speech doesn't have that impact upon his audience in Warringah. Now that might have something to do with the anticipation of a surprise victory for the Liberal party coalition. But, equally, it could well be the nature of the speech itself. 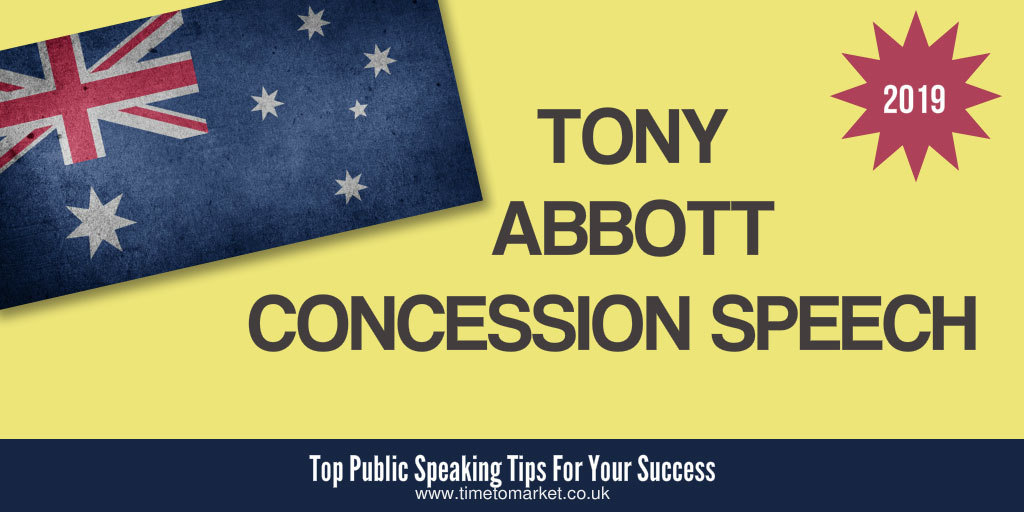 A Tony Abbott Concession Speech In Warringah Ends His 2019 Campaign

Because you really could be mistaken for thinking that this was a victory speech. Certainly all the cues from the audience suggested that, anyway.

He began with a classic contrast.

Well, first I want to say to all of you that tonight we’ve got good news and yes, we’ve got a little bit of bad news. But the good news is much more important than the bad news. The good news is that there is every chance that the Liberal-National Coalition has won this election.

A Clear Tone To The Tony Abbott Concession Speech

And those remarks clearly set the tone for this Tony Abbott concession speech and the reaction from his audience. Because it really did seem like a victory party as news came in from other constituencies throughout Australia.

In terms of form and structure we heard and saw what we expected in this Tony Abbott concession speech. His opening remarks set the loss into context. And he then followed with a sincere congratulations to the victor, Zali Steggall.

What To Put In Your Concession Speech

You only have a few minutes for a concession speech, particularly if your speech is at the count itself. So, you need to make an impact, quickly. But, don't rush yourself as you want to make every phrase count. Because, you never know, you might give the victory speech next time around.

Afterwards he remarked on the overall political picture in Australia, before he said his fulsome thank you to all his supporters, campaign workers and his family.

Finally, I do want to say a big thank you to the people of Warringah. I could not have achieved anything in public life but for the support that the people of Warringah have given me over 25 great years. My public life will I imagine go on. My life as member for Warringah will not. But Warringah is the place where I live. It’s the place I will continue to serve. And I look forward to many many more years living, working and serving in the greatest part of the greatest city of the greatest country on earth.

We certainly did appreciate the Linda McMahon concession speech way back in 2010. But that speech followed a brief entry into politics for the entertainment magnate. However, this Tony Abbott concession speech is markedly different. Not least because it marks the passage of 25 years since his first speech at the Manly Leagues Club in Warringah. Doubtless we'll see more of Tony Abbott in the future.

Of course you can always discover plenty of public speaking tips and tips for speakers with our regular series of posts, podcasts and videos. And, with more than 100 top tips for you to choose, there really is something for every public speaking event. Plus, when you want to boost your public speaking skills, then why not consider some training. Because it has to be the best way to get ahead of the pack with all your speeches. So, when the time is right, please don't hesitate to get in touch.