No Half Measures in Nine 1/2 Hour Chavez Speech

Audiences in the 1980s sensed that the film Nine 1/2 weeks, starring Kim Basinger and Mickey Rourke,  simply shot by. That lasted for an hour and 57 minutes. So, how about a long speech of nine and a half hours? 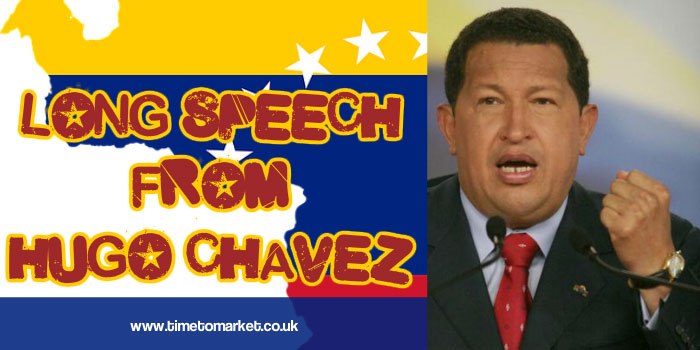 That’s the length of time that Venezuela’s President, Hugo Chavez, has just given to one of his speeches. That’s a long-winded speech by any definition.

This epic speech is one of many that the President is delivering as he re-asserts his authority and popularity after his 2011 illness. It’s a case of no half measures for this speaker. Whether a long oration is the way to do it is another matter.

The hypothesis goes that a 9 1/2 hour speech points to his stamina and strength! That’s the hypothesis that takes no account of his poor, unfortunate audience. He’s keen that his lengthy speeches should re-position him as the choice of the majority in the imminent elections for President.

The President apparently noted that he had simply lost track of time during his long-winded oratory. Was that because he missed the audience’s yawns, their growling stomachs or the setting sun?

As a speaker President Chavez has earned a reputation for lengthy talk. I sense that autocracy does this to public speakers. Just consider the examples of Robert Mugabe speeches or Fidel Castro’s public speaking. What an ordeal.

Autocracy, or a 13-year tenure in office, must be complicit. Just consider what happened when President Chavez had an interactive section in his talk In this section he allowed his audience to ask him questions.

When an opposition Presidential candidate asked a pointed question about Venezuelan living standards, the President responded:

unless she wins next month’s primary she’s out of my league to debate…eagles don’t hunt flies.

Now that’s a put-down and a half from any speaker. Deliver a long speech and then be rude to your audience. Simply amazing.

A public speaking skills coaching session should give you all the skills to avoid the pitfalls of a lengthy speech. You can find out more when you call us.