Actress Sandra Bullock achieved a double distinction this weekend. On Saturday she won a Razzie Award for worst actress of the year (“All About Steve”). And, then on Sunday night she won the more notable Best Actress Oscar for “The Blind Side.” However, it was the Sandra Bullock speech at the Razzies that caught our attention. 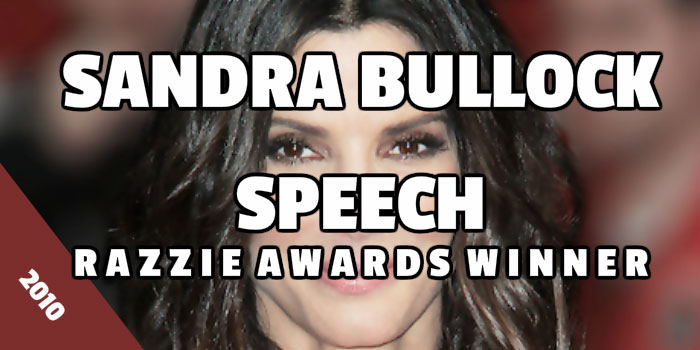 Typically the Golden Raspberry awards go uncollected by their winners. There’s no denying that the Golden Raspberry Award Foundation that organises the Razzies aims for jollity and well-aimed swipes at movie stars. So it should be no surprise that few actors readily collect their Golden Raspberries. But there are exceptions. And Sandra Bullock is an exception. Entering into the spirit of the occasion, she attended the event, collected her prize and gave an impressive acceptance speech.

Sandra Bullock Speech Gets Our Vote

Her speech was humorous and clever from the start. She deftly took charge of the proceedings with some excellent lines, good use of stage props and stage personnel. She made some good points about her film, she challenged her audience to do someting–watch the movie–and she gave everyone in the audience a DVD to help them do so.

In all, a very polished and professional speech that should further boost her reputation.

When you need some hints and suggestions for your next acceptance speech, then you can turn to our public speaking tips. With dozens of tips and suggestions to pick from you can be sure of finding what you need. And, when you really want to excel with your next speech, then please don’t hesitate to ask about our public speaking courses and coaching sessions. And because you can choose from either public courses or one-to-one training there’s something for everyone.