There’s a time and a place for everything. And when you are the British Prime Minister that adage is most applicable when you are on an overseas tour. Because there was a time when British Prime Ministers and Foreign Secretaries would routinely lambast the Beijing regime for its human rights abuses. No more. Now they duck the issue. Big time. And so it was with this David Cameron Peking speech. Issues ducked. 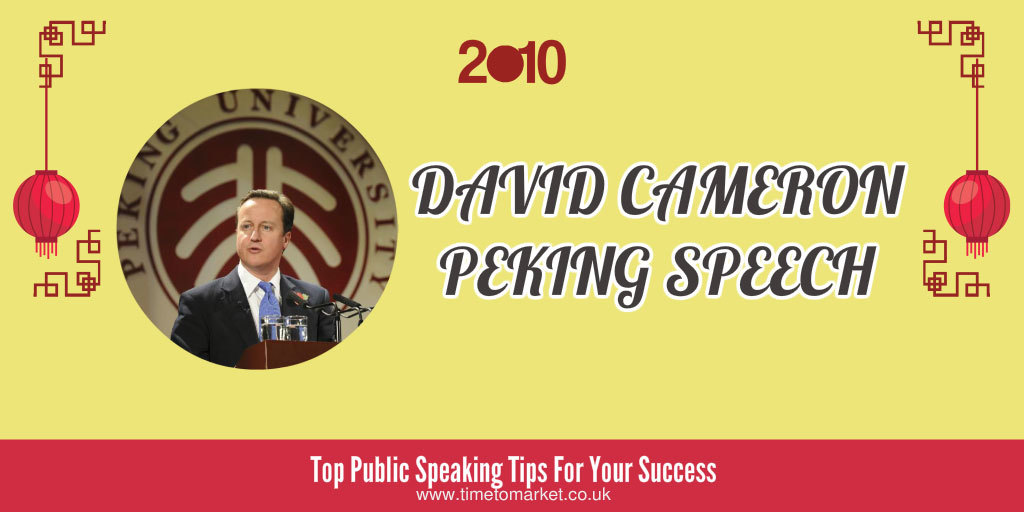 Lambasting the human rights records of other countries, in the form of speeches and interviews, is reserved for Myanmar (Burma), North Korea, Sudan and Iran. It’s not that the human rights situation has dramatically improved in China. No, it’s the case that making speeches on the subject is both a waste of time and effort and impractical.

And so it was last week when David Cameron gave his speech at Peking University.

This wasn’t the occasion for a lecture or a sermon.

So this David Cameron Peking speech began with a reference to his visit to Hong Kong when he was a student–25 years ago. This note allowed the Prime Minister to relate just how much China had changed in the intervening years. He developed this contrast with a series of repetitions:

“No longer can people talk about the global economy

without including the country that has grown on average ten per cent a year for three decades.

No longer can we talk about trade

And no longer can we debate energy security or climate change

without the country that is one of the world’s biggest consumer of energy.”

A Position Taker For Peking Speech

This speech also included a well-worked position taker about the United Kingdom’s relationship with China:

“Now people can react to this in one of two ways.

They can see China’s rise as a threat

or they can see it as an opportunity.

They can protect their markets from China

or open their markets to China.

They can try and shut China out

or welcome China in, to a new place at the top table of global affairs.”

He took this position-taker even further in his speech with:

I say it’s an opportunity.

I choose engagement not disengagement.

Britain is the country that argues most passionately for globalisation and free trade.

Free trade is in our DNA.”

The Prime Minister’s speeches are not yet becoming hackneyed. That will no doubt come. But his references to “zero-sum game” and “free trade is in our DNA” are used elsewhere by government ministers. He even managed to use “Globalisation is not a zero sum game” later in the same speech.

This David Cameron speech at Peking University then examined the economic and political responsibilities in a resurgent China. This was a good account. Albeit, made slightly more other-worldly with the Prime Minister’s idea that China should sort out unsavoury regimes in Africa and Asia as part of its trade mission. Realpolitik, anyone?

The conclusion to his Peking speech took a familiar path, referencing Confucius and stormy metaphors.

“Proof, perhaps, that Confucius was right when he said

within the four seas all men are brothers

Yes, there we will be storms to weather.

Yes, there will be perils to overcome.

Yes, we will have to persevere.

But it will be worth it…for Britain, for China and for the world.”

These stormy speech metaphors feature in many Cameron speeches. However, this was an altogether well-worked speech that sets the tone for more trade between the two countries…just don’t mention the human rights.

Of course you can discover plenty of public speaking tips with our series of tips for speakers and presenters. Because with more than 100 top tips, podcasts and videos from which to choose, there really is something for every public speaking occasion. Plus, when you want to energise your own public speaking skills, then you can always consider some training. Because a training or coaching session will always pay dividends. So, when the time is right, please don’t hesitate to get in touch.