We usually like to finish off the year with a selection of New Year speeches. And, you never know, perhaps we'll take a look at the latest North Korea speech from Kim Jong-un tomorrow. But this year has been far from normal. We are still mired in a media health panic and our conference/ events industry is struggling. So the Prime Minister's speech at the recent "virtual" CBI conference reflects the complete shambles in both the country and key industries. 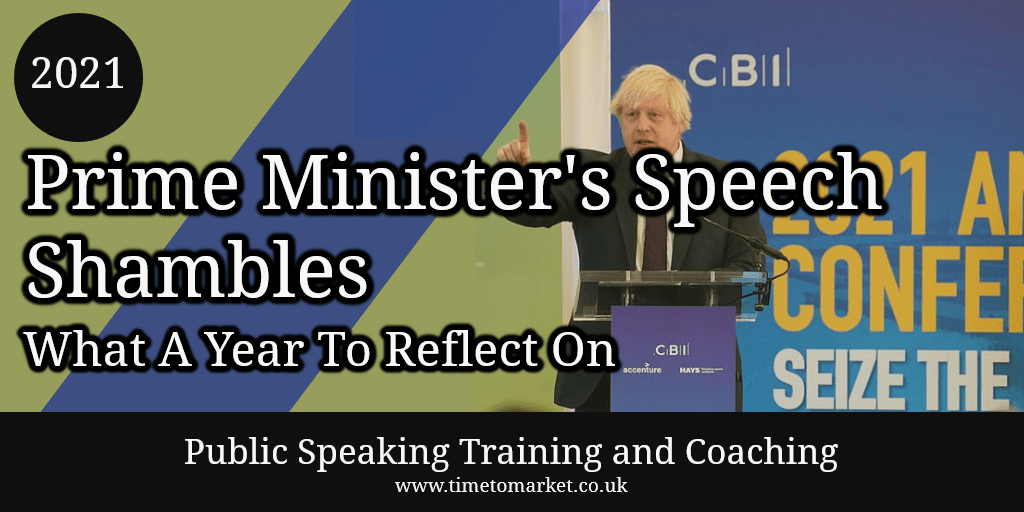 A Boris Johnson speech is usually a tour de force, filled with nonsense and bluster. That's how he does them and he makes no apology for it. Because the Prime Minister knows the value of a good public speaking performance. So his audiences come to expect this.

However, perhaps the hapless Prime Minister should have read the CBI promotional material?

Yes. The clues were all there. The Prime Minister's audience was mainly virtual. Or non-existent. And so a showman who depends on the wide stage and big audience was unlikely to work his magic with this particular audience of no-shows. Sad, yet true.

We've looked at CBI conferences before. And there's more than a suggestion that government ministers don't perform well when they speak at them. An enormously dull energy speech by Ed Davey is still memorable, years after the coalition government ended. His LibDems boss, Nick Clegg, did better at the CBI President's Dinner with a worthy, if un-newsworthy, speech. So we didn't expect a great deal. And we were right.

This 20-minute Prime Minister's speech wasn't without some characteristic Johnson trademarks with plenty of huffing, puffing, exaggerations, and off-colour comments. He even tried some audience interaction. And you can do that when your audience is so small. It worked.

But it was his shambolic use of his script before the 20-minute mark that proved remarkable. Remarkable, but not remarkably good.

Because when you use a script for your speech, even if it's a Prime Minister's speech, you have to make it work for you. And Johnson didn't. Because this was a shambolic mess.

How To Use A Script For Your Next Speech

Yes, no matter if it's a Prime Minister's speech or a Sales Director's speech you must make your script work for you. So, these tips should help you get it right.

Yes, this total muddle of the Prime Minister's speech at the CBI isn't the end of Johnson. Far from it. However, it's certainly a reflection on the chaotic mismanagement of the economy and society for the last two years.

In a lighter note, of course you can always join us for public speaking training, whenever we get back to doing what we all do best. Please do not hesitate to get in touch.