In the week that Germany’s Constitutional Court gave its verdict on the EU bailout, this Herman Van Rompuy LSE speech at the London School of Economics (LSE) yesterday was well-timed. Well-timed and well-executed. Because this was a speech that laid out the views of the President of the European Council to an appreciative audience of economists and political scientists. 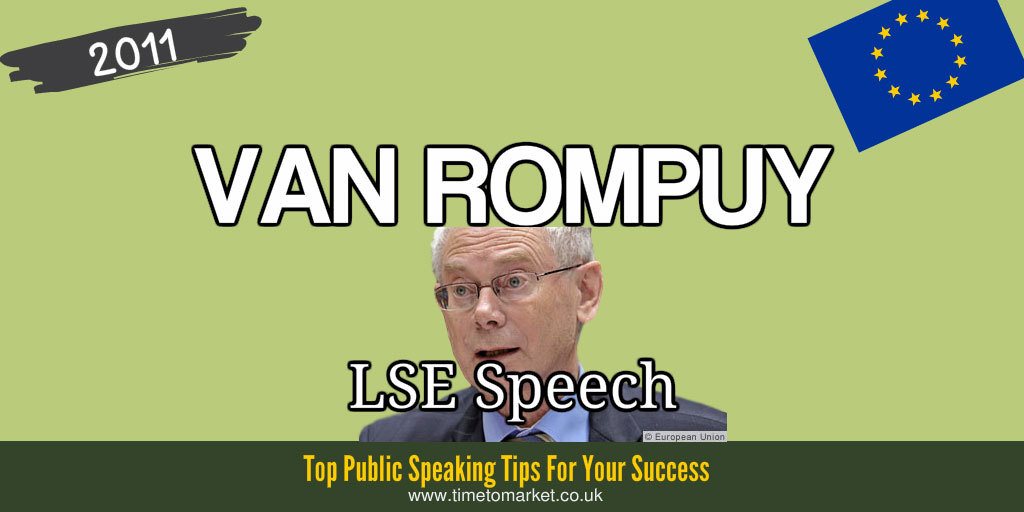 The introduction to this Van Rompuy LSE speech was a classic case of setting the scene, the context and his own expertise in the field.

When I studied economics myself, more than forty years ago, I was much taken by Ralf Dahrendorf—who later was a famous LSE director and played so many roles in British, German and European society.

Ah yes, Ralf Dahrendorf. And so his speech continued in such a rich vein as it explored the economic problems since the Lehman Brothers bank collapse of 2008, sovereign debt and indebtedness in general. Much of this was pretty complex to a layman. But he had the right audience at the LSE.

Clearly his LSE speech also focused on the future of the Eurozone, the Euro itself and the EU. Without tub-thumping, he re-asserted his confidence in their respective futures:

Seen in the light of history, the European Union is too precious an achievement to be put in jeopardy! I say this in a calm and determined way: this generation in politics will do, what must be done.

He’s not English, yet the language in his speech was choice and vivid. So, he treated his LSE audience to:

The political and economic costs of going back are mind-boggling.

Most urgent is to draw the lessons from the recent crisis–from the global roller-coaster which started 4 years ago, and reached a decisive turn in Europe in early 2010 when the Greek problem
exploded upon the stage.

Here was a marvellous metaphor to conjure up the economic highs and lows of the past four years…except that it’s been mainly a descent since 2007.

And was there some forethought in the word link of the “Greek problem” and “the stage”? I think so. But the speaker was too polite to mention either Greek tragedies, Greek choruses, siren voices or Herculean efforts.

Enough. This was a worthy speech from a speaker who we often overlook in the drama that is Eurozone realpolitik.

You can explore a whole range of public speaking tips and tips for presenters with our series of top tips, podcasts and videos. And, with more than 100 top tips, there’s something for every speech occasion. And, when you feel the need to really boost your public speaking skills, then a well-earned training session will always do the trick. So, when the time is right, please don’t hesitate to get in touch.