Veteran California Attorney General Jerry Brown has used a youtube speech to announce his candidacy for Governor this year, 2010. 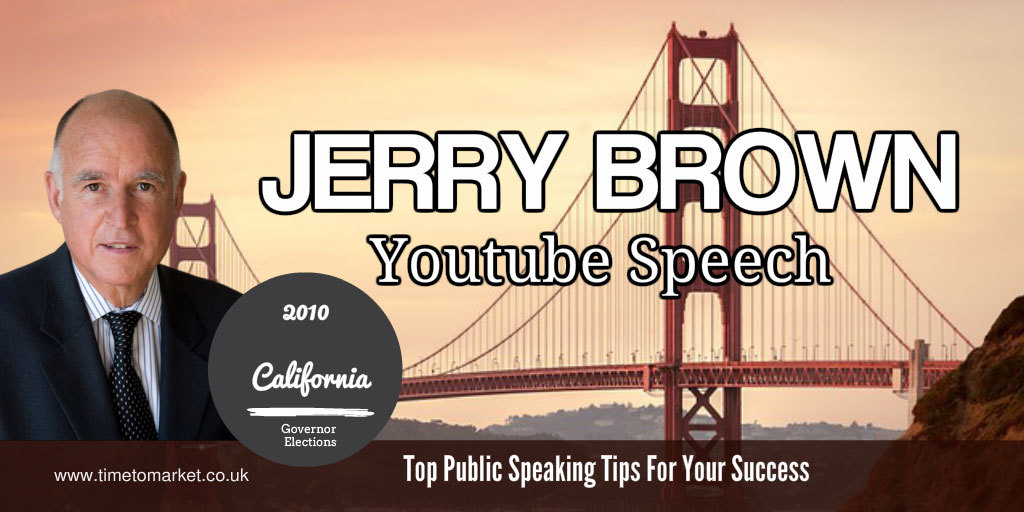 In a brief three minute youtube speech to camera the former Governor laid out his case as a serious candidate. There’s no denying that he’s serious. Because his speech is forceful and direct. He makes good use of lists of three throughout the speech. For example, the budget is described as “always late, in the red and wrong.” And it’s brief. As a veteran campaigner he really does know how long your speech should be.

This of course is a well-known public speaking technique and it certainly has echoes of another California political stalwart, Ronald Reagan.

Alliteration features heavily with phrases such as, “partisan paralysis, “political posturing, “puppy slogans and platitudes” and   “knowledge and know-how.”

The approach to pausing in this Jerry Brown youtube speech is also reminiscent of the former California Governor—Ronald Reagan. They appear when you least expect them and in the oddest places. But it’s effective. As a political speaker, Jerry Brown does certainly know why it’s essential to use pauses in your speech.

As a politician he’s well versed in using a contrast approach to his speeches: “when it works and when it doesn’t work. And it’s no secret that Sacramento isn’t working today.” He then picks up this theme in his conclusion: “let’s get California working again.”

In all, a neat and tidy three minute political speech.

When you want to give your public speaking skills a boost, you can always review the public speaking tips in our Telling It Straight series of top tips for speakers and presenters. Because with more than 100 top tips for you to choose from, there really is something for every type of speech. Though, we have to admit that a youtube speech is a rarity. Though we have come across youtube presentations used by Monmouthshire County Council to promote their annual budget. Who knows? Perhaps it’s a trend.

But, when you want to develop your public speaking skills even further, then you can always consider a training course. That’s because a well-managed course will always give you that extra edge when it comes to speech making.

So, when the time is right, please don’t hesitate to get in touch.