News that Gordon Brown public speaking fees could be as high as £70,000 for a single after-dinner speech might not be that wide of the mark. Since it’s estimated that people are paying as much as £400,000 for Tony Blair conference speeches in the USA…when he’s not busy helping out the UK Labour party, serving as Middle East peace envoy or fulfilling one of his many other business roles. Yes, Tony Blair conference speeches are big business. 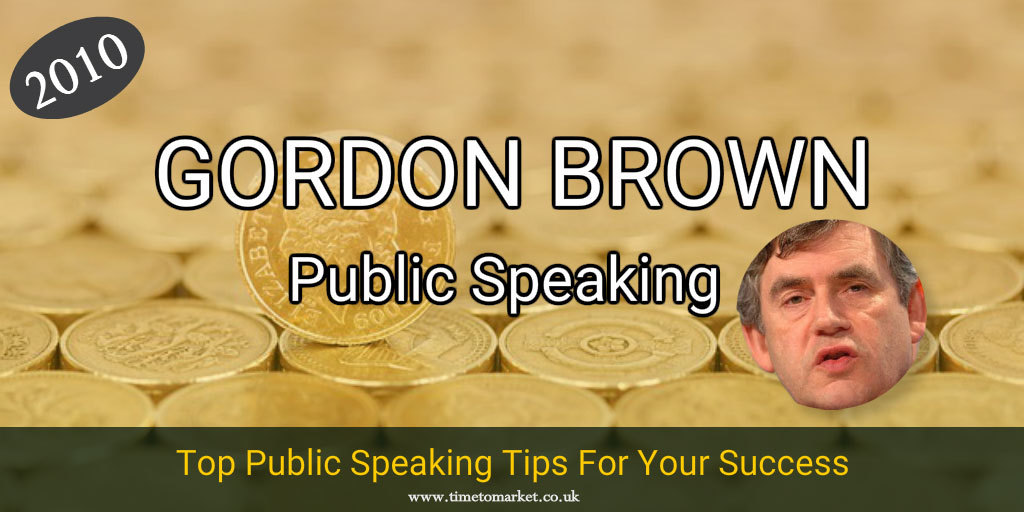 But if the question is, “can Gordon command such a fee”? The answer has to be “yes”.

It’s true that Gordon Brown public speaking skills are not a patch on either Tony Blair or David Cameron. But that’s not really the point.

That’s because his ability to command a speaking fee of £70,000 per engagement is everything to do with his content, his relevance and his topicality. And on the subject of topicality, that might be something for Lord Prescott to ponder after his disastrous Queen Mary speech.

The content of his speeches in corporate America will undoubtedly be the saving of the World’s economic order…and the role played by him between 2007 and 2009. Very flash, Gordon. Because, it’s most unlikely that a fee paying audience will want to be lectured on the role he took in eliminating world poverty.

His relevance is undoubted. As a former Chancellor of the Exchequer for donkeys years and as Prime Minister he was not a spectator at the economic meltdown that occurred in Europe and the USA. He was a key player.

And topicality? The recovery continues. It’s slow and it will take a few more years yet…so the matter of how we got into this mess and how we get out of it remains topical.

But £70,000 a speech? As Gordon Brown public speaking fees go, yes, no problem at all. Since it’s all about presentation content, relevance and topicality. And thinking of topicality…it won’t be topical for ever, Gordon. So, now is the time.

You can always find plenty of topical public speaking tips with our series of tips for speakers and presenters. And, with more than 100 top tips from which to choose, there’s something for every public speaking occasion. You can also aim to improve your public speaking skills with either training or coaching. Because a well-organised training course will always boost your confidence and skills. So, when the time is right, please don’t hesitate to get in touch.

Previous Post Cherie Blair Speech: A Politician, A Financial Director and Me Next Post Public Speaking History Lives On At The Wynnstay Arms Hotel