All Quiet On The EU Referendum Front

It's over. For the moment that is. The big guns have stopped firing at one another and peace has descended after months of EU Referendum speeches, rhetoric and soundbites. Polling stations are open and voting has begun. Exhausting and tiring for the onlookers, we can only imagine what it's been like for the key protagonists. 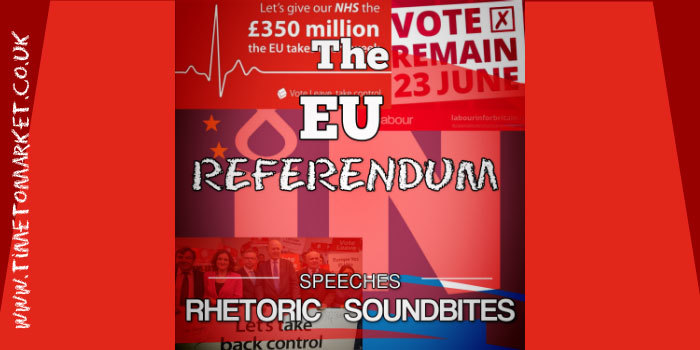 Ceasefire For The Moment With The EU Referendum Speeches

The EU Referendum speeches have been bitter and divisive. ?So much more than anything we are used to in the UK. Because our typical multi-party political system just isn't used to such polarity. In or Out. Stay or Remain. Now, if we lived in the USA, we might have this every four years! Good grief.

But aside from the bitterness and in-fighting we've had some magic moments of rhetorical fancy, persuasion, obstruction and truth-fashioning.

Boris Johnson's EU referendum speeches have proved a hit. Serious at times. Plainly ridiculous at others. But, you can't help but admire the output. Or wonder how he gets away with it in his speeches.

Why? Because negotiating on behalf of the EU is like trying to ride a vast pantomime horse, with 28 people blindly pulling in different directions. For decades deals with America have been blocked by the French film industry, and the current TTIP negotiations are stalled at least partly because Greek feta cheese manufacturers object to the concept of American feta. They may be right, aesthetically, but it should not be delaying us in this country.

The Prime Minister has had a different role to play. Serious as he advocates a Stay vote in his EU referendum speeches. However, we all know how he uses rhetorical techniques so well.

I am very clear. Britain is stronger and safer in the EU, as well as better off. And the EU benefits from Britain being inside rather than out. This is a Europe that Britain has helped to shape. A continent that Britain helped liberate not once in the last century, but twice.

Tim Farron hasn't had much airtime with his EU speeches. Perhaps he deserves more. But with so few Lib Dem MPs at Westminster right now that's probably no surprise.

We shouldn’t allow the Referendum to become a collective exorcism of our Brussels demons at the expense of a rational consideration of what is in the long-term best interest of our country and our people – and what role we want to play in the world.

Nigel Farage, posters aside, has had a good campaign. Here, speaking at the EU Parliament he invoked the spirit of Captain Lawrence Oates:

I hope this is the last time I'll be speaking in this Parliament from a member State. Thank you, thank you, very much. And, I hope we are going to leave this union on June 23 and so... I'm going out now, I may be some time.

There was a slight echo here of the previous Farage Westminster speech made a few years ago.

Former Prime Ministers all pitched in. One was definitely more successful than the others. But Gordon Brown has always had a good vigorous approach to his politics.

An energetic and busy Michael Gove has never been far from the headlines with serious contributions to the Leave campaign throughout. His public speaking style remains serious, however there's an energy to his words that should not be overlooked by political rivals.

We believe Britain is stronger, freer, fairer and can be a progressive beacon for the whole world.

Yes, we know today's really only a lull in the hostilities. It's a ceasefire. So, just as soon as the votes are counted you can bet that the key protagonists will be back in action again. The EU Referendum speech will be history but there's going to be a lot more needing to be said. And it seems perhaps, that we have just the people for that…

"Talkers are usually more articulate than doers, since talk is their specialty."

You can read plenty of tips for public speaking from our regular series of public speaking tips, podcasts and training videos. And, with more than 100 tips, you should find something for every speaking opportunity. Perhaps even for a candidacy speech? Then, when you are ready to take control of your own public speaking a public speaking skills session should get your vote. So, please don't hesitate to get in touch when the time is right.