There’s always a time and a place for a speech. Not least because you always want to achieve something with your speech. To be effective or proactive. Because you really do want to know why to give a speech. So, what about a final speech? A final speech from the current UK Prime Minister, Theresa May? 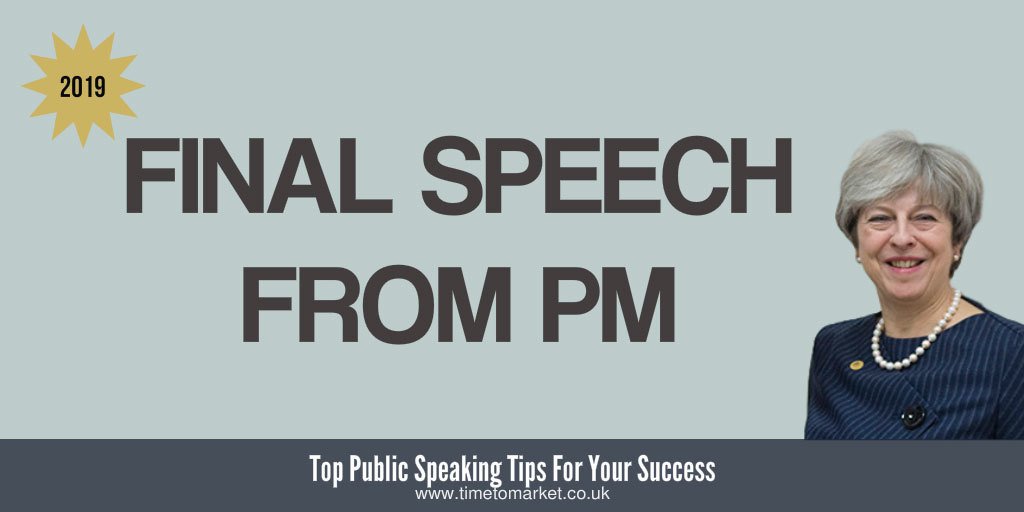 A Final Speech From Theresa May At Chatham House In London

The Prime Minister had signaled that she intended to give a final speech before she leaves office next week. But she wouldn’t give any texts or drafts before delivery. And that’s quite unusual. But if the attending journalists were intrigued, then it wasn’t for long.

A Final Speech From The PM In London

Because it’s safe to say that this final speech from the current prime Minister won’t prove memorable. She chose Chatham House, the think tank, as the venue for her 30 minute speech to journalists and other invited guests. And more oddly she also decided upon a downstairs basement conference room. Really far from ideal.

But then, not much was right about this speech. For example, a recent trillion pound initiative to reduce carbon emissions to zero by 2050 occupied a few lines at best. Yes, a multi-billion £ commitment of taxpayers money. Simply amazing.

The UK is leading the way in that effort with our commitment to net zero emissions.

Is There A Purpose To This Final Speech

We really did struggle to establish the purpose for this final speech. A last hurrah, perhaps. Or an opportunity to settle some political scores. But, no we heard and saw neither. Over 30 minutes we were nearly dulled into submission by a particularly dull speech. And, unless the current Prime Minister sorts out a public speaking career like David Cameron, Gordon Brown or Tony Blair, this really might be the final word. By way of comparison, of course, the final words of Nigel Farage in Brussels are immensely more invigorating.

When you want to put some excitement and zing into your next speech, final or otherwise, then you can always work through our top tips for public speaking. And with more than 100 top tips for public speakers and presenters everywhere, there really is something for everyone. Alternatively, when you are ready to boost your own skills, then please don’t hesitate to get in touch about a coaching session.